When Alternate Contexts are configured on the Contexts Configuration screen, additional fields become available within Squiz Matrix, allowing you to further configure and edit the contexts in the system.

When Alternate Contexts have been created, the Context Switcher will appear in the top header of the Admin Mode interface.

To enter into a different Context, click on the Context Switcher button. A list of available contexts will become available.

Clicking on an option from the list will switch the interface to the selected Context.

You can set the back-end context being edited by appending the query string parameter SQ_ACTION=set_backend_context&SQ_CONTEXT_NAME=name of context to the URL of the asset. This parameter can also be utilised in Simple Edit Mode interfaces, to switch between the contexts being edited.

Once you enter into an Alternate Context, all fields and editable areas will be read-only until you specifically select to customise a screen for that Context.

For example, if you enter an Alternate Context and visit the Details screen of an asset, all fields will be read-only with a checkbox option to Customise the current screen.

If you tick this option and save the screen, only the fields that support Context Customisation will be available for editing. 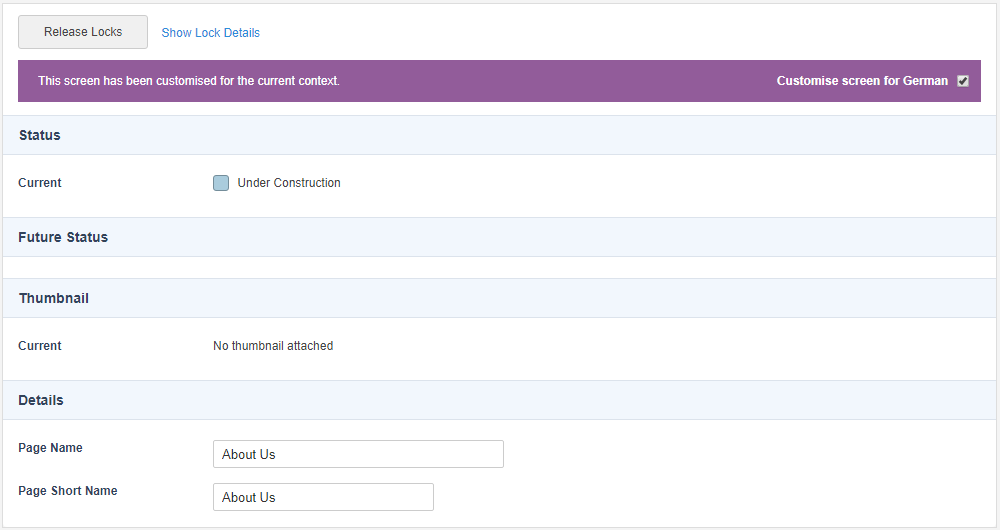 Screens and content that has been customised for an Alternate Context can also be reverted to use the values of the Default Context.

Keyword replacement values can be returned across the contexts of a site through the following format:

will return the name of the asset in the French context.

When using Alternate Contexts within a system, metadata values can be configured individually over multiple contexts and default values can be set for each of these contexts.

Metadata must be manually regenerated on each newly created context before it will be applied.

Setting metadata values and defaults over multiple contexts is done in a similar fashion to editing the contents of an asset, as shown earlier in this chapter.

Using the Context Switcher tool, select a context that you want to edit the metadata for. If you have selected an Alternate Context that has not yet had metadata values and defaults edited, the information displayed will be the same as that on the Default Context. Any changes made to the Metadata Field values and their defaults will remain unique to the selected context.

Please note that the Field Name and metadata Options on the Details screen of a Metadata Field are not contextable.

Setting this field to No will maintain metadata values across all contexts. This is useful when setting important numeric metadata values for information such as product quantities and pricing in an e-commerce store.

By default, all Metadata Fields are Contextable when they are first created.

When using Paint Layouts on a multiple context Site, these layouts are rendered by the currently viewed context, displaying the Paint Layout's corresponding context. This allows you to customise the contents of the layout for each context.

For example, if a Site has been created with three contexts: the Default English Context, a French Context and a Japanese Context. A Paint Layout can be used on the Site to display update information at the bottom of each page, titled Last Updated. As the Site is in multiple languages, the Paint Layout can be configured for each context to display this information in the appropriate language.

Contexts on the Preview Screen

When previewing an asset on the Preview screen, the Context field gives you the ability to switch between the contexts available for the asset. This allows you to preview all versions of an asset. Please note that if Alternate Contexts have not been created in your system, the Context field will appear blank.

When no Context field is available, the system's Default Context will always be displayed. On a system where Alternate Contexts have been created, a drop down list will be displayed, as shown in the figure below.

The following options are available in the Context field:

To review a context on the Frontend, append the query string parameter SQ_ACTION=set_context&SQ_CONTEXT_NAME=name of context to the URL of the asset. You can also clear the context of a page with SQ_ACTION=clear_context.

Setting Base Contexts for Site URLs

To change the Base Context of a URL, select a context from the list and click Save. This context will then be used as the default context for the Site.

Base Contexts can be utilised by creating multiple URLs, catering to specific Alternate Contexts.

In the example below, a Site has been configured with three different URLs for each of its language Alternate Contexts. Please note that no conditions have been set for these contexts.

When the Site is viewed on the front-end, each URL will display the selected Base Context. The configured URLs can then be used as links, allowing users to manually change the context of the Site.

When you have multiple contexts on a system, it can be useful to configure certain User Groups to be automatically assigned to a specific context when they first log into Squiz Matrix.