Steps to Creating a Design

The first step in creating a design in Squiz Matrix is to create a static HTML version. An example of a static HTML file that has been created can be seen in the Appendix: Example Static HTML File. Placeholders (i.e. HTML comments and dummy content) are used within the design to indicate where the Squiz Matrix design tags need to be placed (for more information on the design tags refer to the Design Tags chapter). The design that this code produces is shown in the figure below.

Referencing Files in the Static Design

Most HTML designs have a number of files that are used for formatting purposes, for example, images and cascading style sheets. 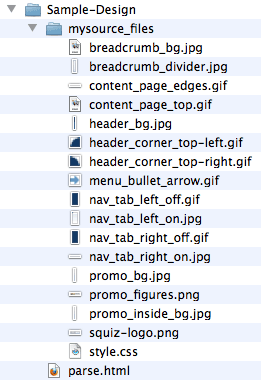 When creating the static HTML version of the design, it is recommended that these files are stored in a folder called mysource_files. When a file needs to be referenced in the HTML, mysource_files/<filename> is used. For example, if you have an image called image.jpg and want to reference it in the HTML file, the following code can be used:

The structure that was used when creating the example design above is shown in the figure to the right. The static HTML file is called parse.html and the files that it references are stored in the folder called mysource_files.

Uploading the Associated Files for a Design

Once a Design asset has been created, go to the Details screen. In the Associated Files section, select the files from the mysource_files directory and click Commit. Only two files can be selected at once.

Once the files have been uploaded they will appear under the Design asset in the Asset Map. The figure to the right shows some of the associated files for the example design in the Asset Map.

Step 3 – Add the Required Design Areas to the Design

Once a Design asset has been created, the required design areas need to be added. Design areas are Squiz Matrix XML design tags that are added to the HTML of a design to allow for the creation of dynamic content. These areas are parsed by the system and are replaced with the correct HTML to produce the layout that is seen on the frontend of the site. There are a number of different design areas that are available, with each one adding a different element to the design. For example, the Body design area adds the content of the asset into the design. Appendix: Example Parse File shows the parse file for the example design once the design areas have been added.

Step 4 – Status and Permissions for a Design

In order for the public to see the design of the Site, the Design asset, its associated files and any Design Customisations need to be Live and Public Read Permission granted.

Step 5 – Applying a Design to a Site

Once the Design has been set up, it needs to be applied to the Site or a page in the Site. To apply a Design, go to the Settings screen of the asset. In the Designs section, select the Design in the System Defined Fronted Design and click Commit. For more information on the Settings screen, refer to the Asset Screens manual.