The LDAP Bridge asset is used to interface to an LDAP directory, which can be either OpenLDAP or Active Directory. Users will then be able to log into the system by using their LDAP username and password. You can also use LDAP users in Workflow Schemas, Permissions and Roles. 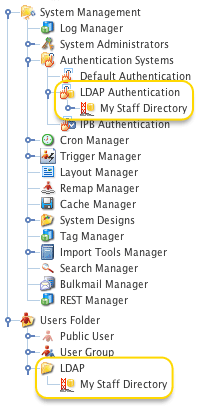 To add an LDAP Bridge, in the Add menu go to LDAP -> LDAP Bridge. You can create an LDAP Bridge anywhere in your system where User Groups are allowed. To allow users to log in using their LDAP accounts, however, it needs to be linked under the LDAP Authentication asset. For example, the figure to the right shows an LDAP Bridge called My Staff Directory, which has been created under the User Folder and linked under the LDAP Authentication asset. By doing this, it allows users, who are not System Administrators, to access your LDAP directory so that they can change Permissions, create and apply Roles and create Workflow Schemas.

Once you have created your LDAP Bridge , you can configure the asset on its associated screens. Many of these screens are the same or similar to those for a Standard Page and are described in the Asset Screens manual. In this manual we will only describe the Details, Attribute Setup and LDAP User Setup screens, which are different for a LDAP Bridge.

Steps to Setting Up a LDAP Bridge

To set up an LDAP Bridge, perform the following steps:

If a LDAP Bridge is not linked under the LDAP Authentication folder, Users will not be able to login.

Status of an LDAP Bridge

Once you have set up a LDAP Bridge, you need to change its Status to Live so that users can log in. If the LDAP Bridge is Under Construction it is considered inactive and users will not be able to log in.

Using Users and Groups from the LDAP Bridge

Please note that the functionality of the LDAP Bridge within the Asset Map has a limitation of 1000 LDAP records on a single level. For example, two groups containing 800 users each will both function correctly in the Asset Map while a single group containing 1600 users will not.

LDAP records that do not function in the Asset Map can be maintained using the Squiz Matrix backend search field. You can locate specific users and groups using the <bridgeassetID>:<userDN> format, allowing you to individually edit the permissions and roles of these records.

If you are unable to see LDAP users or groups in the Asset Map, check the following things.

How are Groups and Users Identified?

When Squiz Matrix looks for groups or users in LDAP, it identifies them by using the objectClasses outlined in the tables below. If a group or user in LDAP is not using one of these objectClasses, it will not be displayed in the Asset Map.

Because LDAP Users are shadow assets, you can't search for them in the same way as normal users or other standard asset types. However, you can directly go to an LDAP User's Details screen using the Quick Search tool by entering the asset ID of the LDAP Bridge, followed by the LDAP CN. For example:

Alternatively, if you are using the Use User ID as Shadow ID setting on the LDAP Bridge, you can simply enter the bridge asset ID followed by the username: